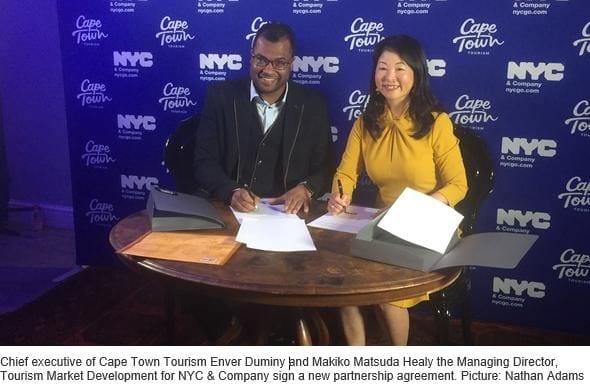 It’s not really worlds apart, only time zones – but the Mother City and the Big Apple are continuing their partnership.

Built on a foundation of trade exchanges, the two tourism authorities are marketing the destinations in their cities to encourage direct travel.

So you’ll see billboards of Cape Town in any one of the five New York Boroughs and in Cape Town you’ll notice New York being advertised on buses and at the airport.

Enver Duminy, chief executive of Cape Town Tourism says it’s a win-win for both cities’ marketing campaigns: “For us that’s amazing, if I look at the rand if I had to advertise in New York, trust me, all the budget in the world that I have as Cape Tourism wouldn’t even scratch the surface.”

The announcement comes hot on the heels of the Cape Air Access statement that United Airlines will launch a direct flight from Cape Town to New York on December 16.

The flight from New York/Newark and Cape Town will see a Boeing 787-9 Dreamliner aircraft fly in and out of the Mother City. It has 48 seats in business class and over 300 economy seats on the direct, non-stop flight.

Alderman James Vos, Mayoral Committee Member for Economic Opportunities and Asset Management, including Tourism says there will be positive spin offs for Cape Town once the direct flight takes off.

He says: “This new flight from New York will result in about 24 000 additional inbound passengers… projections indicate that travellers from the United States will grow by an estimated 20% and approximately 900 new jobs will be created during the first year.”

Shaving four hours off current travel times, the first direct flight from New York is scheduled to arrive in Cape Town on December 16 and there are three flights planned weekly over the tourism high season in Cape Town.